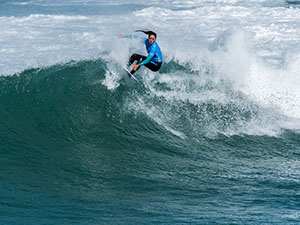 The battle for pay equity has scored a victory offshore: Women surfers will soon be competing for equal pay in prize winnings after the World Surf League announced this month that beginning in 2019 men and women will be compensated equally in all WSL-controlled events.

The effort got an epic boost from a state agency with the leverage to beach one of the signature events of the season. In August, in the wake of a campaign by the Committee for Equity in Women’s Surfing, the California State Lands Commission issued a report bluntly suggesting that if it expected to lease public lands for the Mavericks invitation-only surfing competition, the League should revisit policies under which female surfers were to compete for $44,000 in prize money, while the male purse was set at $106,0000.

Carving Out a Victory for Pay Equity in Women’s Sports

“The waves do not discriminate,” the Commission staff wrote. “There doesn’t appear to be any reasonable justification to treat prize money differently.”

The report was a welcome bit of leverage for supporters of the effort to establish equal pay in women’s sports, who have called attention to gaps in earnings and prize purses in soccer, basketball, golf, and tennis.

On September 5, the World Surf League, which acquired the rights to the Mavericks event in 2017, tweeted its decision and noted that the decision makes the WSL “the first American-based global sports league to offer gender pay equality.”

The pay equity issue was the second time the State Lands Commission had waded in to level the surf for women competitors. In 2016, the commission made the addition of women’s heats a permit condition. This winter, if the surf cooperates and the event moves forward, the Mavericks competition will include women competitors for the first time.

At SBS Payroll, we are part of a family of companies dedicated to helping your business navigate the waves of change, with cost-effective solutions that span the entire landscape of compensation issues.

Our clients can focus on their businesses without getting dragged under by inefficient manual processes or compliance worries. We provide state-of-the-art technology and unparalleled customer service, amplified by the expertise of our sister companies, Payroll Tax Management and Time Rack.Contact Us to Learn More about SBS Payroll