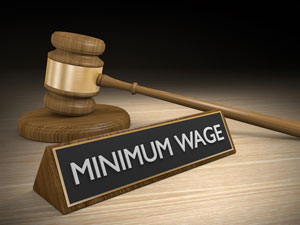 If you are an employer with more than 25 employees and located within the city limits of Los Angeles, you will need to start paying your employees $12.00 per hour as of July 1, 2017. Employers with 25 or fewer employees will need to pay at least $10.50 per hour.

Assuming you want to avoid the prospects of lawsuits filed by the City, is this change reflected in your current payroll system?

As part of a ballot measure passed last year by Los Angelinos, the minimum wage was first increased to $10.50 per hour for >25 employees as of January 1, 2017. The minimum wage increase is just the second step of an increase that will eventually reach $15 an hour by July 1, 2021.

As reported earlier this week, the City of Los Angeles has filed a $1.4 million lawsuit accusing the fast food chain, Carl’s Jr., for allegedly paying 37 employees across seven locations below the current $10.50 per hour minimum wage for >25 employees.

On a related note, the City of Anaheim this week filed a federal lawsuit against a phone sex company that pays its performers below the federal minimum wage of $7.25 per hour in violation of the U.S. Fair Labor Standards Act.

In 2014, the City of Seattle increased minimum wage to $15.00 per hour, the effects of which have been covered by two studies released this week by the University of California, Berkeley and the University of Washington. According to The New York Times, “The Berkeley study focused on the restaurant industry because of the high proportion of restaurant workers who are paid the minimum wage. It found that for every 10% that the minimum wage rose, wages in the industry rose nearly 1%, and that there was no discernible effect on employment.”

On the other hand, a yet-to-be-peer-reviewed University of Washington found that the minimum wage increase, “…resulted in higher wages, but also a significant reduction in the working hours of low-wage earners. This was especially true of the more recent minimum-wage increase, from as high as $11 an hour to up to $13 an hour in 2016. In that case, wages rose about 3 percent, but the number of hours worked by those in low-wage jobs dropped about 9 percent – a sizable amount that led to a net loss of earnings on average.”

You need to ensure that your payroll includes the minimum wage increase to avoid lawsuits. All of our LA employer payroll providers are ready, so let us know if you need help to do so or if your current payroll provider isn’t responsive enough.Contact us to learn more about the new minimum wage and payroll