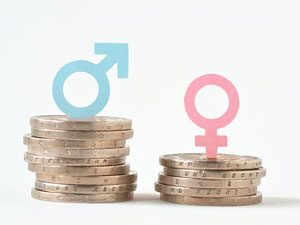 Practices that leave women earning less than their male counterparts for the same work have been debated for decades in every part of the country, creating a patchwork of state and federal efforts to close the gap.

But when Hollywood shines its spotlight on an issue, extra attention is paid.

Reports in January that actor Michelle Williams earned dramatically less than her co-star Mark Wahlberg for re-shoots of scenes in the movie “All the Money in the World,” rekindled the debate in a way that is likely to keep it onscreen for a while.

When the discrepancy was reported, stars such as Jessica Chastain and Eva Longoria were quick to take up Williams’ fight.

The drama drew new attention to the issue of equal pay, in addition to money pledged to fight for it within the entertainment industry. Wahlberg, who said he is 100 percent behind the equal pay standard, pledged his $1.5 million fee to the Times Up Initiative Legal Defense Fund, started by Hollywood’s leading ladies to address pay disparity, sexual harassment and discrimination against women in the movie and television business.

If you’re a California employer, here’s what you need to know about recent amendments to the state’s Equal Pay Act.

California has long been comfortable leading the way on worker protections, with or without the star power. The state’s Equal Pay Act, prohibiting employers from paying employees less than employees of the opposite sex for equal work, is decades old.

Recent amendments have broadened protections to include race and ethnicity-based wage discrimination and to make “substantially similar work” the basis of comparison, instead of “equal” work.

The amendments, which took effect on January 1, are expected to make it more difficult for employers to justify such discrepancies.

According to the state’s Division of Labor Standards Enforcement (DLSE), employers will have to prove that any such pay gaps are the result of:

A new minimum wage law went into effect on January 1 as well, requiring California companies with 25 or fewer employees to pay a minimum hourly wage of $10.50. Employers with 25 or more workers are required to pay $11 an hour. There are exceptions for outside sales workers and children of business owners. The pay scale for the state’s minimum wage will increase every year until reaching $15 an hour for large employers by 2022.

Local wage ordinances throughout the state, including in Los Angeles, have other minimum wage workers earning more.

We Can Help You Keep Up

Whatever wage or employment laws you need to be on top of, SBS Payroll can help. Our clients have access to a suite of integrated HR information management, support tools and payroll solutions. We also feature a database of state and federal regulatory information as well as on-demand HR support services.Contact us to learn about our HR support center services